Upgrading Your Garage to an Accessory Dwelling Unit 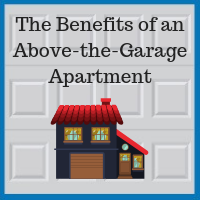 Accessory dwelling units (ADUs) are a top trend in today’s real estate market. What, you may ask, is an accessory dwelling unit? An ADU is a second small residence located on the same lot as a typical single-family home. The ADU category includes over-the-garage apartments, basement apartments, in-law apartments, carriage houses, and tiny houses. ADUs may just seem like a new name for an old concept, but there is definitely something new going on, and an ADU may be a great custom garage solution for your home.

What Are the New Reasons for Building ADUs, Including Above-Garage Apartments?

In today’s housing market, generational differences, an aging population, and financial issues are some of the factors behind the growing interest in ADUs. Any or all of these could be reasons for you to consider adding a second residence to your existing property.

Many of today’s largest homes were built for the Baby Boomer generation, who are now aged 54-72. As Boomers start downsizing for retirement, who is going to buy those big suburban homes with three car garages and large bonus rooms above the garage? Converting some of these properties into a smaller home with an ADU may be one solution.

That solution could suit the Millennial generation, currently aged 22-37 and projected to outnumber the Boomer population within the next year or two. Millennials often prefer to live in more densely populated areas where they can get around without a car. They are often saddled with large student loan debts, leaving them less money to spend on a home. Millennials also tend to be more interested in spending their money on travel and new experiences than on maintaining a large home.

As the U.S. population ages, in part due to the Boomer generation reaching retirement age, and in part due to lengthening lifespans, there is a growing need for new, more affordable ways to care for elderly people who cannot live alone. There has been a corresponding rise in the number of one and two person households, contributing to the need for more flexible housing options. ADUs can make it easier for families to care for older members without resorting to an enormously expensive assisted living facility. Alternatively, an elderly couple could make an ADU available at a reduced price to a younger person or couple in exchange for day-to-day assistance.

Both Millennials and Boomers Are Often Cash-Strapped

While many Millennials are debt-burdened, many Boomers are entering retirement with insufficient savings to maintain their preferred lifestyle. Adding a garage apartment to a single-family property enables a Boomer parent to rent an apartment to a Millennial child, or a grandparent to rent to a grandchild, keeping family close by while providing financial benefits to everyone.

While some cities and zoning boards do not like the idea of ADUs, this is likely to change in the next few years as more residents demand it. For example, in January 2017, California enacted a new law making it easier for property owners to get ADUs approved. As of March 2018, the city of Los Angeles had already issued building permits for over 3,000 ADUs and was receiving roughly 300 new ADU permit applications per month.

Add an Accessory Dwelling Unit to Your Garage

Blue Sky Builders of Downers Grove has been building custom garages for over 39 years throughout the greater Chicago area. If you are thinking about adding an apartment space to your property as part of a new or expanded garage, contact us at 630-852-8485.