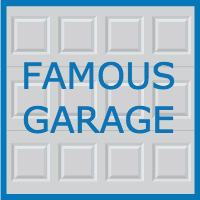 Our blog has gone into detail on plenty of alternative uses for your garage, one of them being a home office. Garages offer the perfect place for entrepreneurs to do business as they provide no cost to operate out of and allow them to work from their home. Even some of the biggest companies in the world can be traced back to their garage-based humbled beginnings. One of the most famous companies to start out in a garage is tech giant Hewlett-Packard. This garage has become so well known that it is listed on the National Registry of Historic Places and is know as “the Birthplace of Silicon Valley”.

In 1905, Dr. John Spencer first built his property at 367 Addison Avenue in Palo Alto, California. He added the garage years later, and it first became occupied by Dave Packard in 1938. That same year, Bill Hewett moved into the residence’s garage so that he and Packard could begin their business partnership. At the time, they only had $538 between the two of them. The garage measured only 12 by 18 feet, and consisted of just a concrete floor and a workbench. Hewlett and Packard spent their early years developing the HP 200A, an audio oscillator that Walt Disney invested in for his famous hit, Fantasia. This product was manufactured entirely in their garage in Palo Alto. By 1940, Hewlett and Packard had become big enough to move onto bigger and better things, however, the company still pays respects to its birthplace.

Today, HP is a widely-known as one of the world’s leaders in innovation. The garage at 367 Addison Avenue perfectly emulates the company’s drive and entrepreneurial spirit. In 2000, the property was purchased by HP and it has since been remodeled as a national landmark. HP finished the restoration project in 2007 and the property now resembles the same house that Hewett and Packard occupied in 1938. HP’s story is a great example of how a garage can be much more than a place for storing your things and parking your car.

For more useful tips or to inquire about custom garages in the Chicagoland area, contact Blue Sky Builders online or call (630) 852-8485. We have successfully served customers throughout the area for nearly 40 years.